Learn how to configure XDebug and PHPUnit in PHPStorm, allowing you to write better tests and fix bugs faster.

Test Driven Development (TDD) is an old topic, I know, but it seems many people don’t understand how it makes you write better code. The point here is that one of the most important benefits it’s to use debugging tools together with tests, making your flow more efficient.

I started using TDD on the command line, and still use it sometimes, but since I started using PHPStorm and decided to try how it handles tests, and that’s amazing! When you add debugging tools – like XDebug – to it everything starts making sense, then you have the feeling you’re on the right path.

PHPStorm has a dedicated interface to run and debug tests, almost in the same window, what makes the process of writing code safer and easier.

I’m not gonna teach you how to write tests and even how TDD is good. I’m assuming you already have some tests written and just want to run them in PHPStorm, debugging with XDebug. I’m gonna use the tests from my open source project Corcel.

First let’s configure XDebug in PHPStorm. We’re assuming here you already have the xdebug PHP extension installed. In my case, I’m using Laravel Valet, and it runs on the port 9000, the same port XDebug runs by default. So I had to update my php.ini file to change its port to 9001. My config file is located at /usr/local/etc/php/7.2/conf.d/ext-xdebug.ini:

When type php -v in the command line I can saw the XDebug extension enabled: 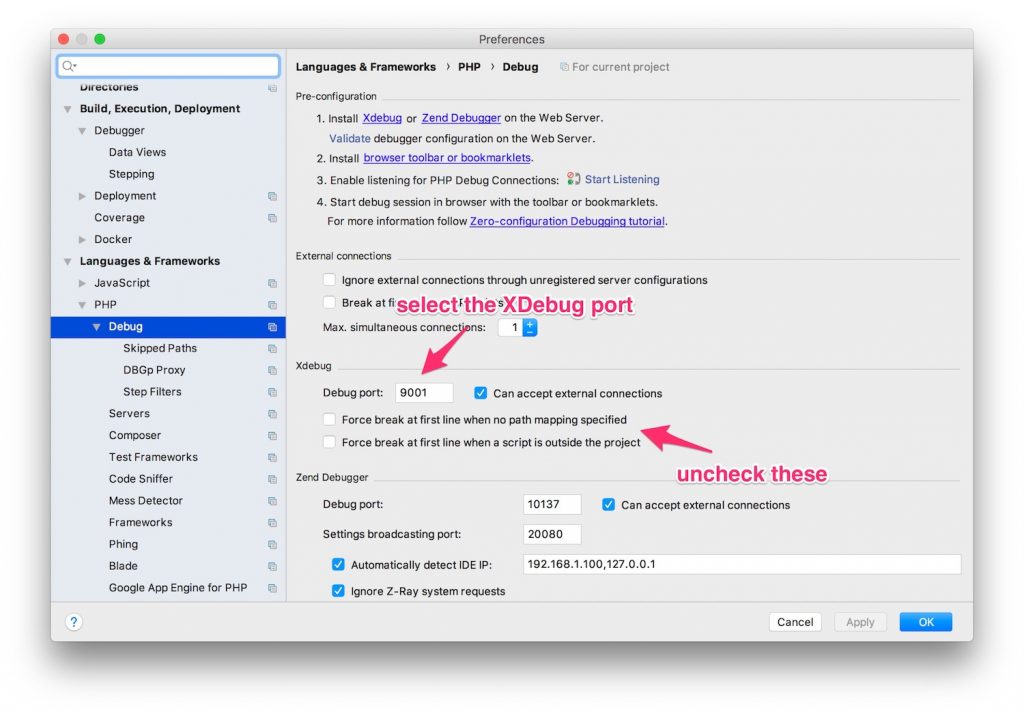 First we must tell PHPStorm which PHP version we’re using and where is that PHP binary. This is necessary for code checks in the IDE and for running PHPUnit. Just set that in your IDE’s preferences window. You should set something like this: 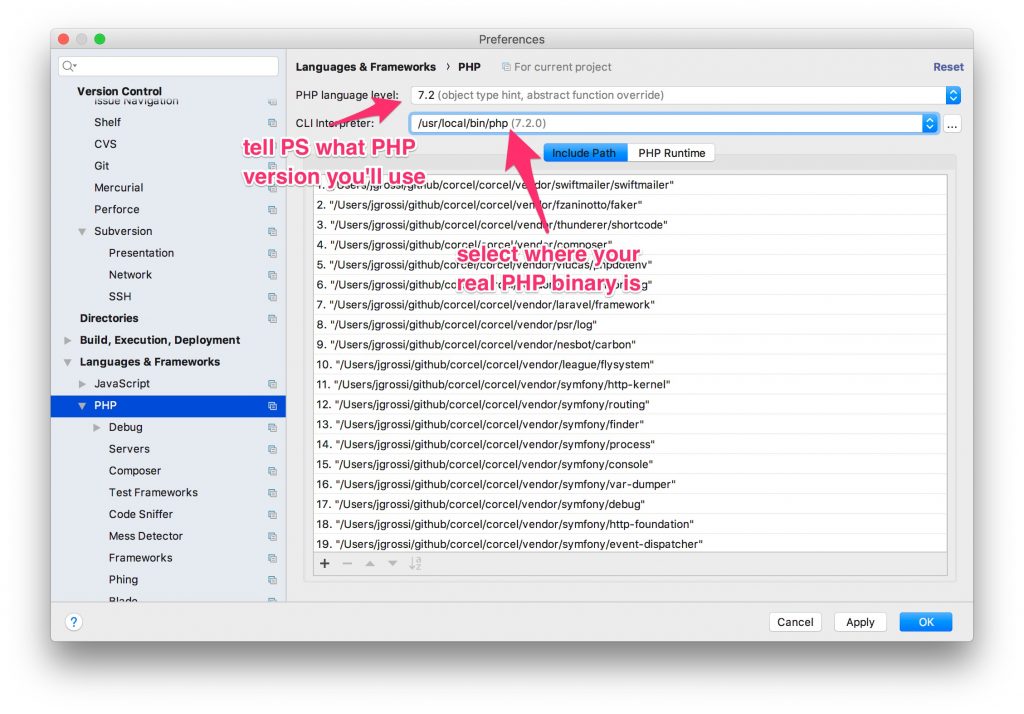 Now go to Run -> Edit Configurations. Here we’re going to create a new configuration related to PHPUnit, give it the phpuni name and say PHPStorm we’d like to use the configurations in our phpunit.xml file. 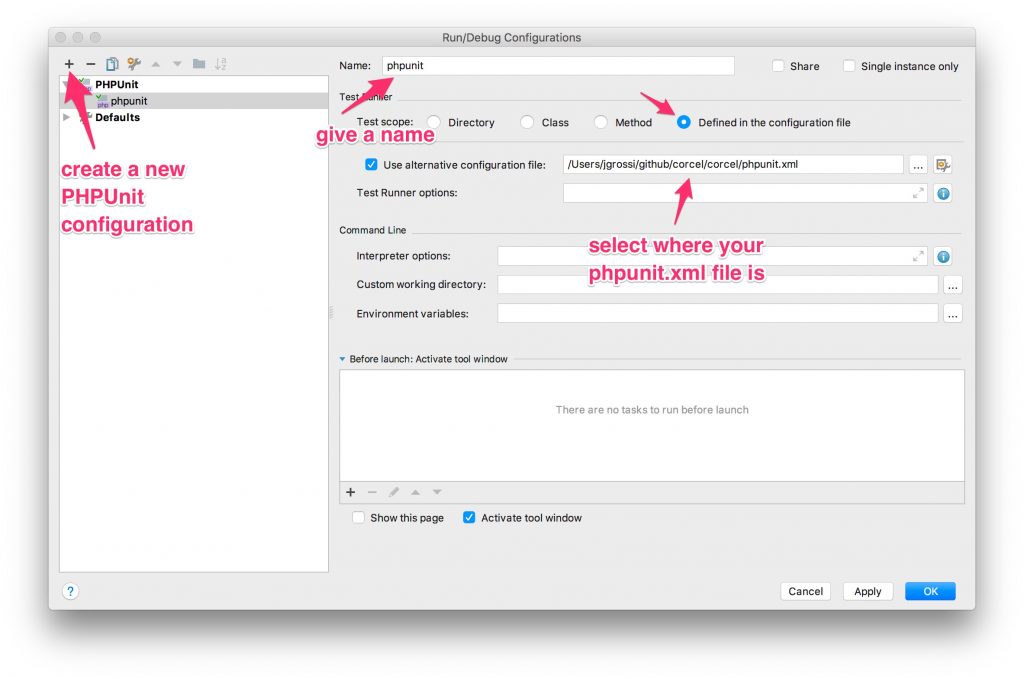 Now let’s run all tests Corcel has. Go to Run -> Run and then select phpunit. This is the name we gave to the configuration we just created. You’ll see a new tab on the bottom of the window with all your tests running:

In this case we run all 139 tests. The point here is you can run just one test case or even the last one. In this new tab if you click on a single test case in the left sidebar and Control + Shift + R you’ll run just that specific test. The same can be used when you’re inside a class and want to run just one test/method. Inside any part of that method, if you press this shortcut you’ll run that test case. If you press the shortcut outside a test case method you’ll run tests for that specific class, all them.

If you’re fixing a bug in another class, not the test one, and you want to run that test again to see if it’s passing now. You can press Control + R shortcut. This tells PHPStorm to run the last run test, only. Then you don’t have to change the current file you are to run the last test case. Very useful!

The point here is you enabled XDebug. So you can debug while testing. Let’s take a simple test case from Corcel:

I’m gonna add a break point inside the $comment->isApproved() method, like this: 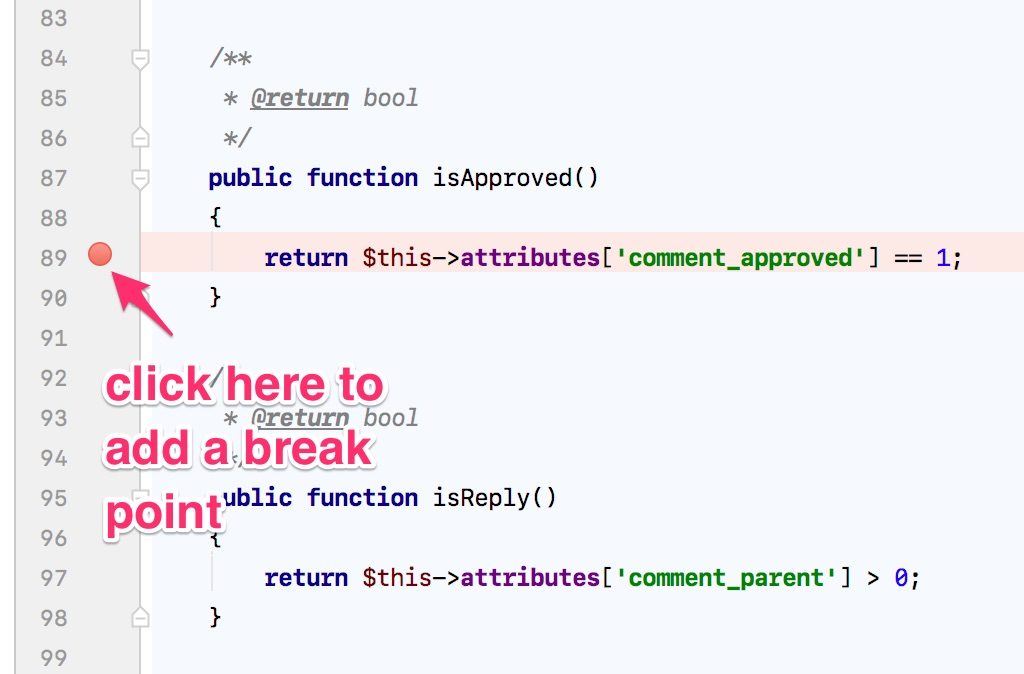 To run tests with debugging support use Control + Shift + D for the single test case and Control + D for the last one, just replacing R by D.

If you run the same test with debugging support you’ll stop on that breakpoint, and then the magic starts happening. You will get a lot of information at that specific point, like current variables content and even continuing the executing step by step. You’ll get all that in the same tab you saw your tests running: 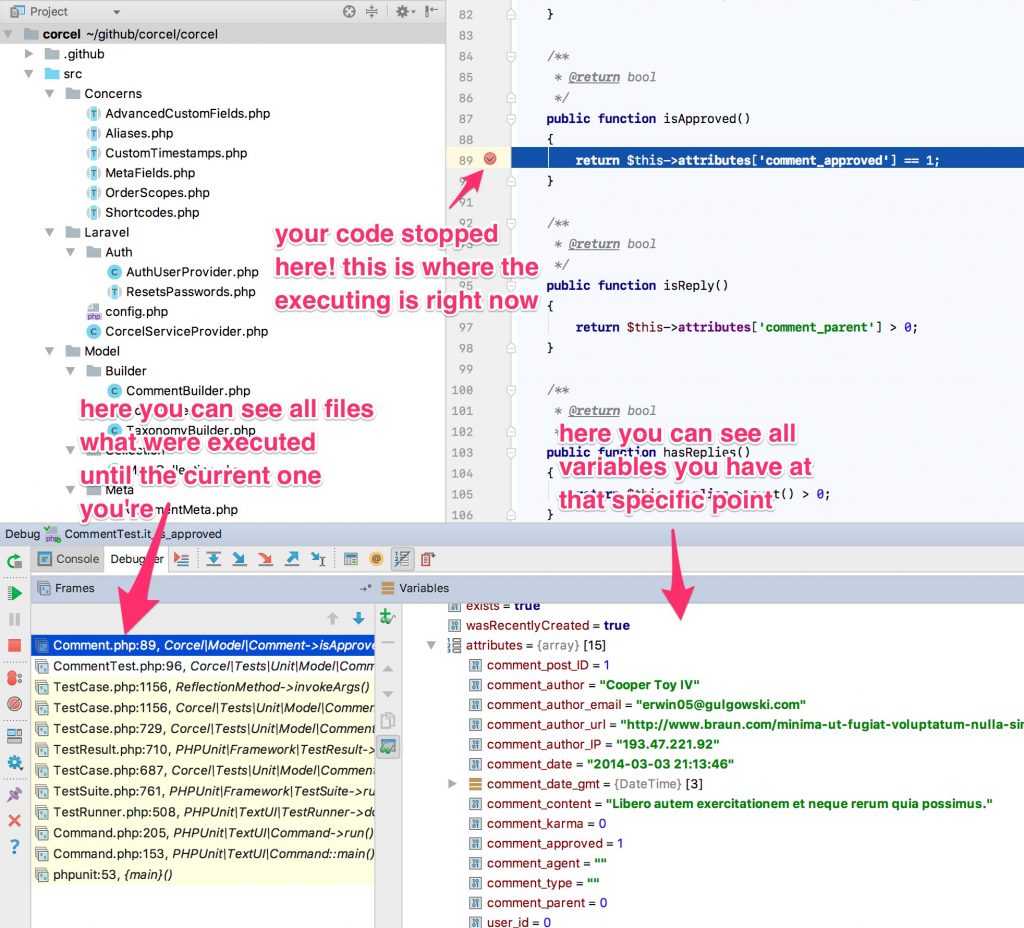 Then, debug your code. You have to useful commands/button to press. Here are some examples: 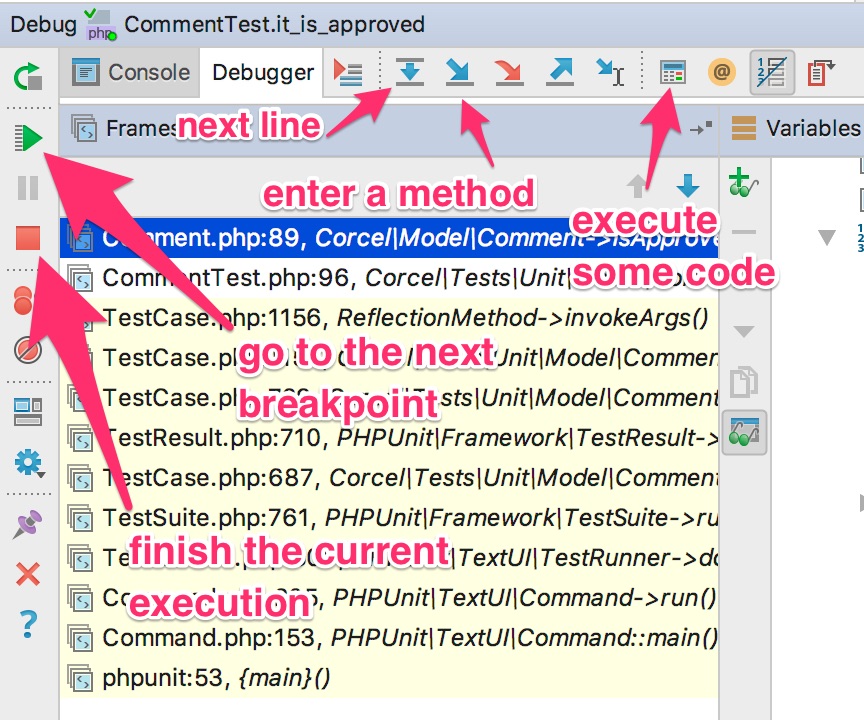 TDD and Debugging are two important steps in development. Once you start using them you cannot stop, but for sure, you’re writing better and safer code, believe me.

7 thoughts on “Using XDebug with PHPUnit in PHPStorm”